Aura Technology and Amicus ITS combine 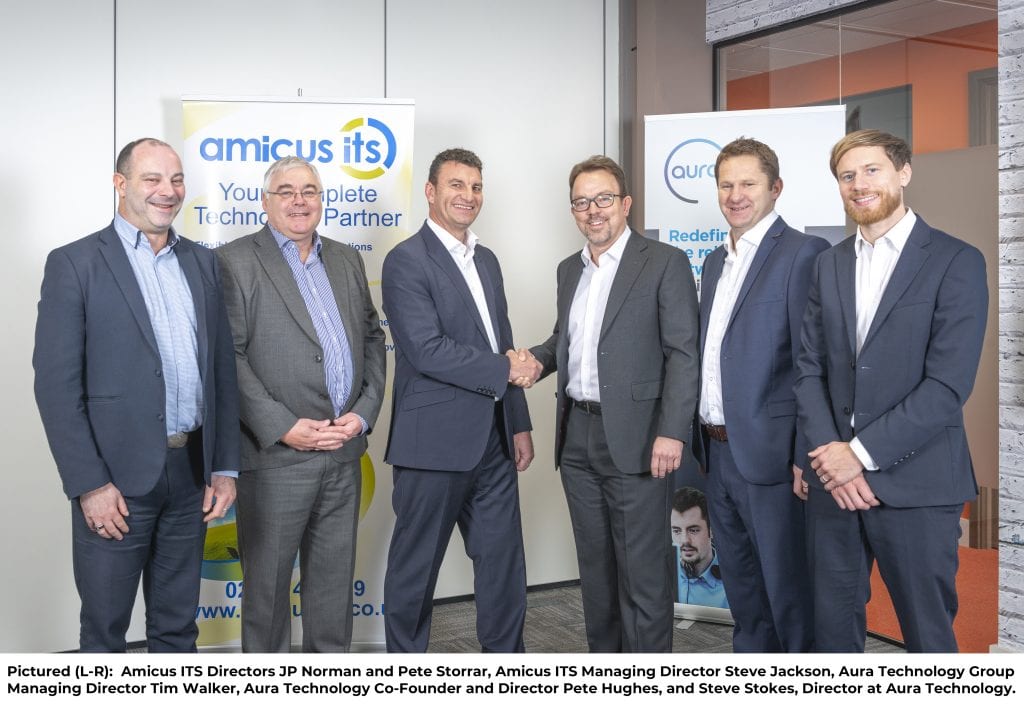 Strategic IT providers Aura Technology and Amicus ITS have combined in a deal which creates a £10m+ turnover group operating in the private and public sectors.

The two businesses, both with headquarters in Southampton, become sister companies under the Aura Technology Group. Aura and Amicus each retain their own identity and client bases while sharing expertise and the ability to offer customers an improved range of products and services.

Aura Technology will continue to deliver on its mission to “redefine the relationship between business and IT”, working at senior level with private sector organisations with a focus on the mid-market of 50+ IT users. Amicus ITS retains its focus on public sector customers, with specialisms including in particular the public sector and healthcare.

Tim Walker, Managing Director at Aura Technology, becomes group MD while Steve Jackson, MD at Amicus ITS, remains with the business in a non-executive board role. The senior teams of directors at both businesses remain in position.

The group’s team of more than 100 specialists will be based out of the existing sites operated by Amicus ITS, which is headquartered in Totton.

The deal was privately funded with Peter Jeffery from the Corporate team at Moore Blatch acting on behalf of Aura Technology, and Oliver Kelly from Pitmans advising Amicus ITS.

The announcement comes after two years of sustained growth for Aura Technology since the company was launched in 2017 by co-founders Tim Walker and Pete Hughes. Earlier this year the company appointed Sir Clive Woodward to the board in a non-executive role.

Tim Walker said: “Amicus ITS is established as a leader in IT services in the public sector and shares the values that we have built Aura Technology upon. It is unusual to find such a mid-market and enterprise-focused business in the sector, and I am pleased to welcome the Amicus team into Aura Technology Group and look forward to working together to build on our success in delivering outstanding IT solutions to existing and new customers.”

Steve Jackson said: “Tim and the team at Aura Technology have a passion for excellence and for working in close partnership with customers to provide solutions that meet their strategic goals. The two businesses complement each other perfectly and the team at Amicus are excited to be driving into the future in what I believe will be a formidable force.”

Sir Clive Woodward added: “I joined the board of Aura Technology because I recognised it as a leader in strategic IT solutions with huge growth potential. The integration with Amicus ITS creates a group of two companies with outstanding teams, synergy and shared values alongside the ability to deliver outstanding service and solutions to organisations in both the public and private sectors.”

Aura Technology works with a diverse range of clients in both the private and public sectors and has strategic partnerships with technology leaders including data backup specialist Datto. For more information see www.auratechnology.com

Amicus ITS was established in 1988 as a specialist in IT solutions for the healthcare sector and regulated markets and is an accredited Crown Commercial Supplier. See www.amicusits.co.uk